School uniforms through the ages

With those ubiquitous first day at big school photos of their darling offspring taking their first step into public life covering our social media feeds, we thought we would delve into the history of the British school uniform.

Contrary to popular belief that school uniforms sprang from the public schools of Britain, they actually began life in earnest at charity schools. Although it is believed that the earliest documented institutionalised academic uniform dates to 1222 when the then Archbishop of Canterbury ordered the wearing of the cappa clausa; a long robe that is sewn up at the front.

But it wasn’t until 1552 that Christ’s Hospital founded by King Edward IV at Grey Friars in Newgate Street, London to provide food, clothing, lodging and learning for fatherless children and other poor men’s children introduced a standard uniform. That uniform hasn’t changed since Tudor times and consists of a long blue coat, worn with matching knee breeches, yellow socks and white neck bands. The girls of Christ’s Hospital wear the same coat, but with matching skirts. Unlike most schools in the UK the uniform is still provided to all pupils free of charge. Not to feel left out the tutors also have to wear a similar version of the uniform. The long blue coat became so famous that these institutions in London led to be nicknamed ‘Bluecoat Schools’. 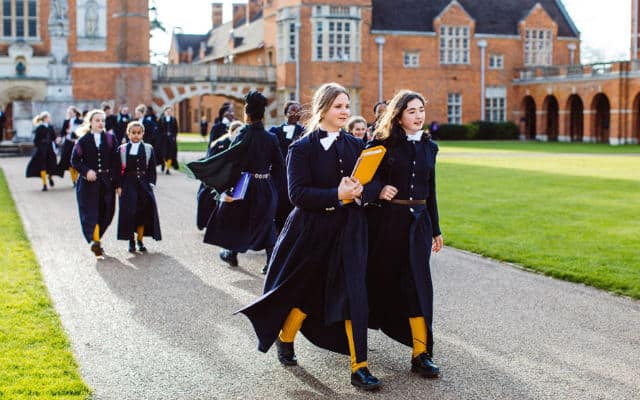 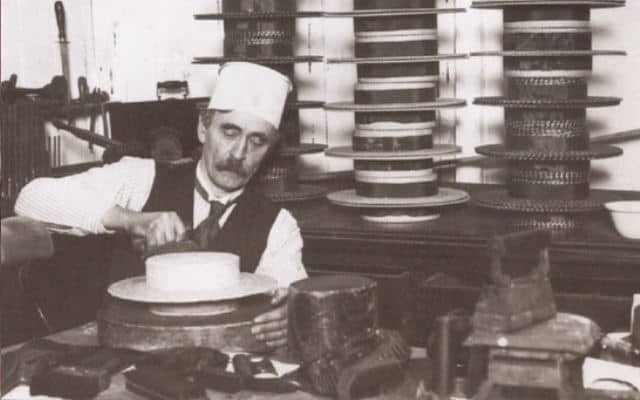 Other British Schools also have famous traditional quirky uniforms. Harrow has the straw hat that is a Harrovian take on the traditional boater. Which is to be worn at all times even in class, apart form on Sundays. The hat was first used on the cricket fields of Harrow in the 1820s but later adopted by the whole school in the 1830s. A black and white version known affectionally as 'The Speckled' first appeared in 1851 was made by E.G. Chatham on Harrow on the Hill and can only be worn by the school XI. The elite of the elite you might say.

Eton have the ‘Eton Dress’ which consists of Top Hat (although in the 1970s pupils were no longer required to wear them), white collar, pinstripe trousers and morning tails; think Lord Snooty from the Beano or in fact a young Jacob Rees Mogg and you’ll get the gist.

For special occasions the ‘Poly Bells’ uniform of Dame Allen’s School in Newcastle gets to be shown off. This very traditional uniform that consists of a blue dress with red laced up front, a white linen waist apron and white linen bonnet comes from the 1700s when the school was founded.

The djibbah from Roedean school near Brighton is a tunic style uniform which was apparently inspired by North African tribesmen. The girls were allowed to express their individuality and could choose their own coloured silk and personalise the neckline from a selection of birds and flowers in a book of designs developed especially for Roedean. The last djibbahs were worn in the late Forties, but ceased when the material proved scarce after the war.

Another rather unique school uniform, certainly not from the Harry Potter school of uniforms, are the red dungarees from the rather liberal school Knighton House. The school believes that the dungarees aid learning as a no fuss utilitarian alternative to formal school uniforms. For those old enough to remember Rod, Jane and Freddy must have gone to Knighton House.

The school uniform has also become a symbol of rebellion too through the ages. Many of Britain’s favourite child scoundrels ‘tweaked’ their school uniforms to become anti-heroes. The first was probably Billy Bunter, the overweight, glutinous pupil of GreyFriars School. He was self important and arrogant unlike William Brown or Just William as the character was better known who was the original naughty school boy although he was without malice, except with his homemade wooden catapult.

The infamous school uniform gang that many will have fond memories of was the St Trinian’s girls, seen as juvenile delinquents, causing mayhem wherever they went. And probably only the 1970’s in Britain could we have spawned the cabaret act The Krankies and particularly Jimmy Krankie, played by Janette Tough. Jimmy Krankie was the archetypal naughty schoolboy and the characters uniform of red cap, tie, blazer with badges and short trousers defined how British schoolboys were supposed to look like, with bruised and mudded knees to boot.

When Sir Gordon was at school fashion dictated how cool or rebellious you were. Where most pupils would wear their ties as they should be worn, those of a rebellious bent wore them very short, so short they looked more like Scouts toggles. Or the thin side was used to create a very slim tie with the wide side tucked into your shirt so unseen. Or in fact with the largest knot that could be possibly made. And some took it to the extreme, by turning their school ties inside out so the label was showing. 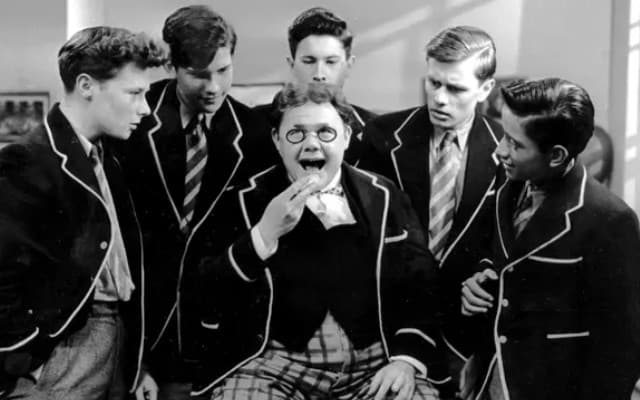 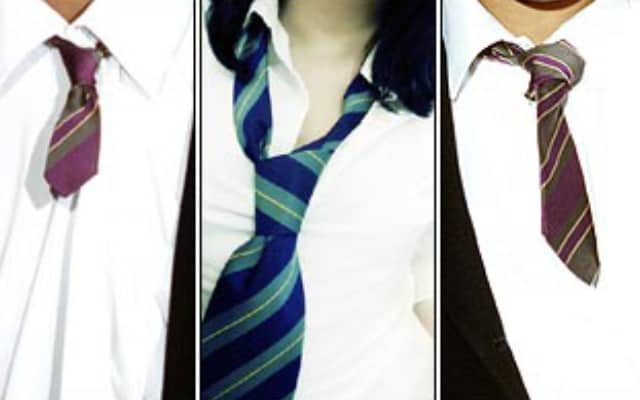 The Pros & Cons of School Uniforms

School uniforms have played a part in most of our lives. And unlike most of Europe, apart from Ireland and Malta, are pretty much mandatory, even though some schools are rather more lax than others.  Flat caps, blazers, tunics and school ties in various forms consist of the British school uniform. But these styles have evolved into a more comfortable style for modern education. School uniforms have both those in favour and those who are against them and both sides have reasons why.

Some claim that a school uniform prepares students for the formal attire associated for the world of work. Although with the change in how we work and the types of jobs now available to students, this reason seems to be diminishing.

Uniform gives students a sense of place and identity when wearing a uniform, like all uniforms this is being part of a community with a shared sense of values.

Those in favour of school uniform provides much-needed differentiation between school and home. That sense of dressing up for education to put pupils in the frame of mind to learn.

Although a uniform is a distinct look, it is also a blank canvas of sorts where everyone looks the same and the social standing of not having the latest trends can help pupils in not feeling inferior to those that can afford ‘fashion’. Which in turn helps all social classes fit together and decrease bullying. A social camoflague if you like.

It is aslo claimed that wearing a school uniform positively affected pupil’s behaviour and attendence.

The biggest con detractors claim is the extra cost of school uniforms. This can be a burden on those on lower incomes.

In a world of personal expression and freedom those who are against school uniforms claim that wearing one can inhibit individuality especially when children are trying to find their own self.

Although those who believe that attendance and behaviour are improved with wearing a uniform there is no evidence that this means those wearing one get better grades.

Some believe that a school uniform, especially from a fee paying school that is distinct could attract attention from criminals and possible muggings.

Others believe that they can also stifle religious expression. Many students aren't able to meet the dress standards of their particular faith. The two codes of dress, school and religion being contradictory. 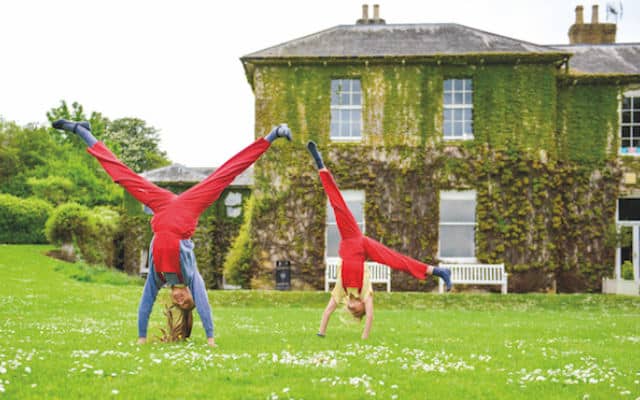 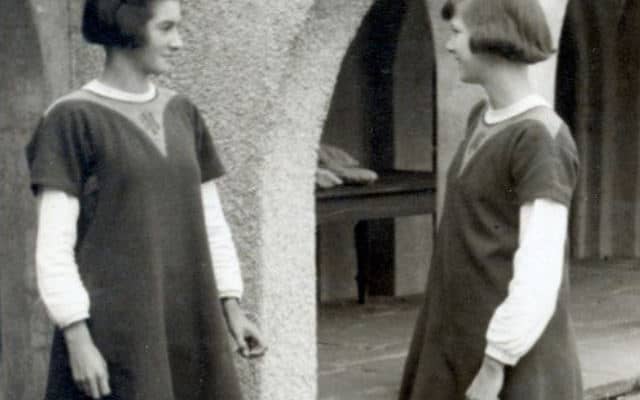 The Furture of School Uniforms

School uniforms are a hot topic and the future seems to be a more relaxed style of polo shirts. Although for the more established Public Schools the school uniform represents their identity for good or bad. Part of their allure for those that send their children to these schools is the uniform and part of the whole package.

Christ's Hospital surveyed its pupils to find out if it should keep its distinctive 16th Century style blue coats and yellow stockings and 95% said they should. "It is important to stick to our historic traditions, not only to be unique and special, but it makes a sort of unity between us," said one pupil.

As noted earlier Britain is an outlier when it comes to school uniforms in Europe. But from Sir Gordon’s experience, many mainland Europeans who visit these isles think that uniforms are ‘cute’ or add to a sense of quirky tradition that is unique to Britain and in fact Britishness.

We don’t purvey school uniforms on SGB but we think that Britannical’s children’s coats are absolutely splendid. All handcrafted in London they make the perfect coat for the small person in your life whether they wear a uniform or not. 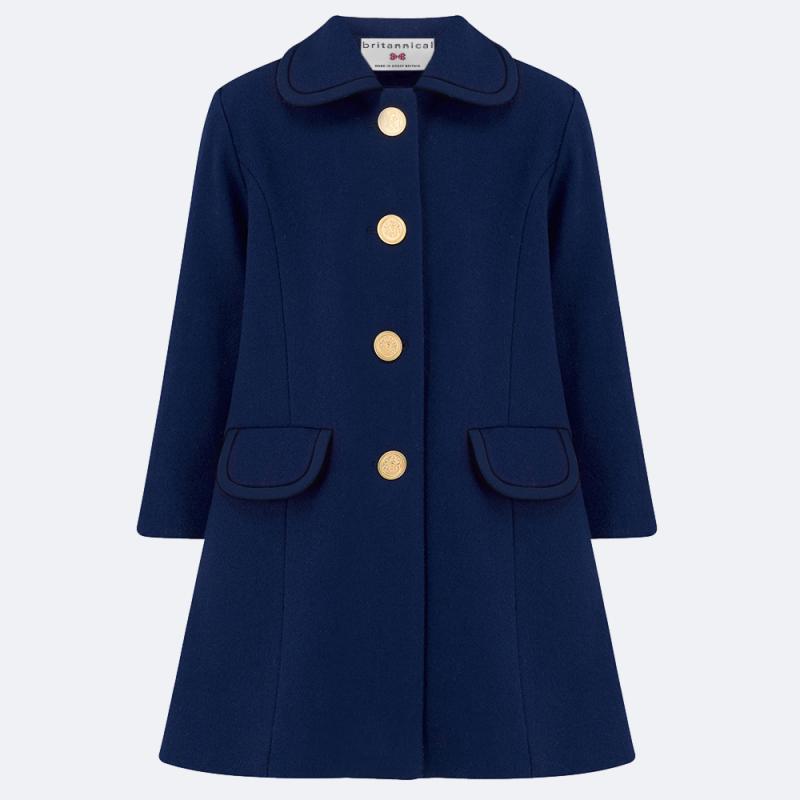 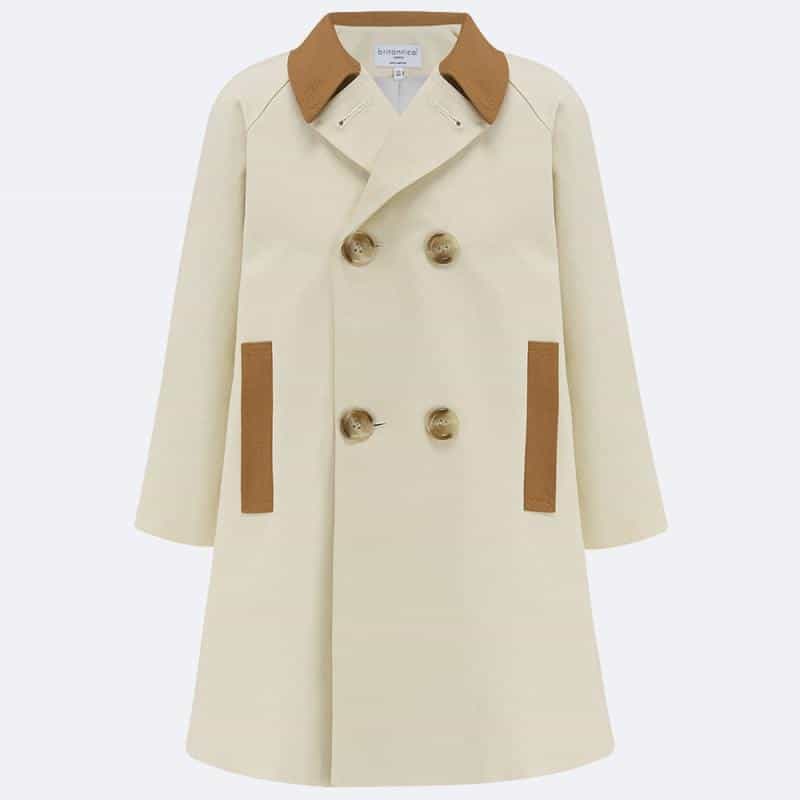 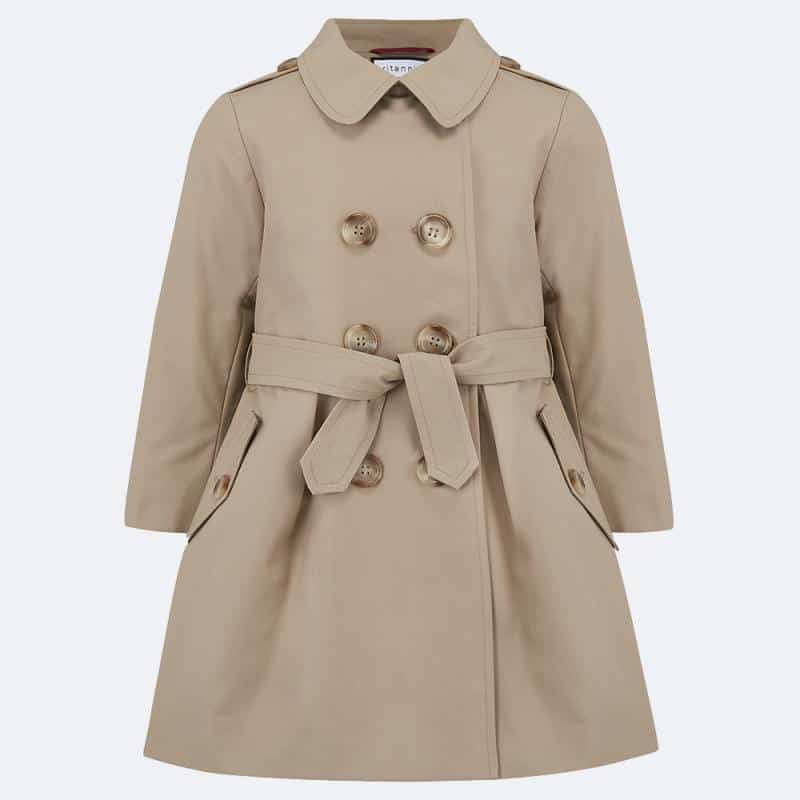